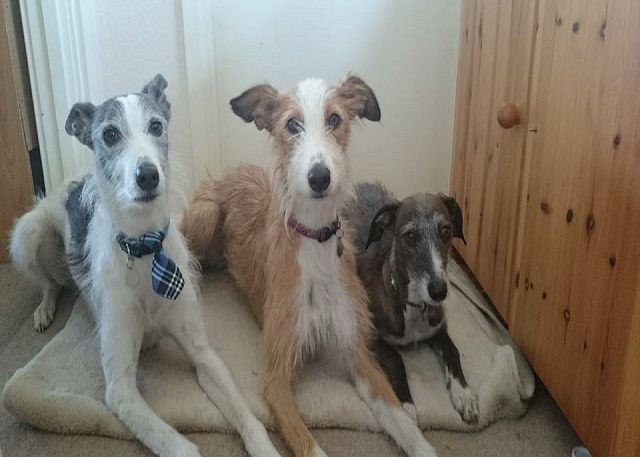 In August 2014 I was at Stokenchurch Dog Rescue to volunteer my time for some gardening work, not intending to adopt whatsoever, having two dogs of my own already. Then I bumped into “Dipsy” returning from a run and he greeted me like family. A few weeks later he was home with me and we renamed him “Wilf”.

He settled in very quickly but the trust and the bond took longer, though they’re definitely there now. We think he might have been told off for doing the wrong things a fair bit in his previous life because as well as withholding his trust at first, I found we struggled in training classes. He’d get a bit stressed if he didn’t understand what I was asking of him, so I learned to take things mega slowly with his training and use even more reward and praise than normal. It took me about a month and a half to just teach him paw. As such I was bursting with pride earlier this year when he passed his Kennel Club Good Citizen Bronze Award test. Such an achievement for us!

Realising training wasn’t going to be our “thing” we soon discovered how amazing Wilf is as a stooge dog. His body language and eye contact are non threatening and his focus on me is fantastic so we’re able to work with Pets in Practise and dogs who are fear and frustration reactive to help desensitise them them around dogs. It’s really rewarding and I’m really proud of how good Wilf is at it.

In other news, Wilf and I have been busy fundraising for SDR with our friends; we took part in the 10km sponsored walk at Easter and were able to donate a total of £630 to the Rescue. Then in May we climbed Snowdon with friends and raised a further £800+. He's a really lovely boy who makes an impression on people and those people have been generous with their donations to our efforts.

All of this and he’s been family for less than a year. I look forward to seeing what else we can achieve and to the many excellent snuggles he provides! Thank you to SDR for keeping him safe for the 9 months before we found each other!

Please support us by playing the Weather Lottery