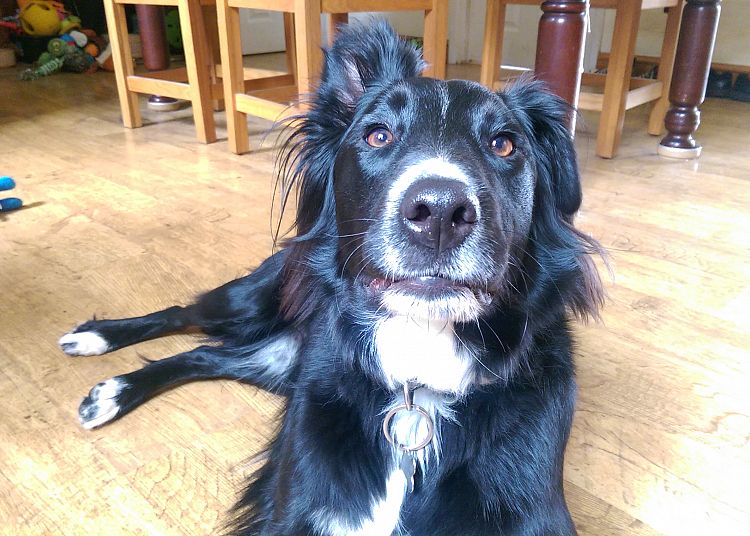 For 15 years I had the best behaved dog in the world. Frisbee (inherited name) was pure Border Collie. You could leave doors/gates open and he'd just look at them.  You could walk him off lead without a concern for other animals (expect cats... but who can resist chasing a cat), he liked people, was patient with children, (when he got very old he carefully moved out of their reach), he ignored most other dogs, said hello politely to those who came to talk to him and also sat patiently for their owners to collect those dogs when recall wasn't quite working We got him when he was about a year old and he died peacefully at home in his bed surrounded by his favourite toys when he was about 16.

About 2 years later in September 2013 , Kris Glover (Pets in Practice) posted a video of Jacko from the SDR website. I immediately fell in love and decided he was my dog.  After going through the appropriate checks and meeting Jacko we picked him up and bought him home.  We knew he reacted loudly to most things, we knew he was struggling to cope in SDR with stress levels, but we thought he would be fine once we got home.  He cowered all the way back in the car, we entered our back garden and he immediately jumped in the (deep) fish pond.  Once in the house he paced and panted constantly for 3 days, only stopping to sleep in very small bursts through total exhaustion.

Everything disturbed him. The TV, people outside, someone upstairs, the clock, the cooker, the dishwasher, the washing machine, the toilet flushing, the cars outside.  This wasn't just a "bit of stress", this was an animal who had no idea what it was like to live in a house.  We had to lift him to get him into a car, we had to walk him in small bursts.  Outside he reacted violently to everything by barking, growling and spinning.  He wouldn't accept food outside, everything was too intense to concentrate.  He ate his dog crate, he didn't chew anything else though... which was a bonus.  There were "accidents" indoors for the first couple of weeks but they soon stopped.  The pacing and intense panting slowed down inside.  He learned how to sleep before he collapsed with exhaustion.

What we did wrong.  We didn't have the right equipment, a simple collar/lead was not good enough and we had a couple of escapes and (quite frankly) terrifying moments with an out of control collie running amok.  We didn't have the right food. We didn't realise what a range of quality there was available now, and with a such a high stress level how high quality was needed so he didn't burn through it all and stay hungry.  We didn't set expectations for our visitors in how they should behave, we didn't make allowances for what a shocking start to life he probably had been through (nobody knows) and how much he needed to learn to trust people.  We expected a quick result to a "normal dog".

What we did right. We got help.  The fabulous people at Pets in Practice gave me tips and advice.  We used huge amounts of reward base training.  Jacko stayed on lead until he had been with us a year.  Then it was a tentative off lead in places I knew would be quiet, where he couldn't put himself in danger. We did lots of playing in the house, Jacko learned that food outside was a good thing so we could do more training outside.  We learned the best ways to manage a walk when there was people or dogs approaching (usually change direction to reduce stress triggers or keep them to a minimum).  We sat near bus stops and busy roads as lorries and buses went past with huge piles of kibble.  We go up to parked vans (a particular trigger) because we can now, and they do not scare him.  We go to nice places in the car so Jacko jumps in happily and lies down waiting for nice things.

We are pushing the boundaries now, we go to slightly busier (people) places and hang round the outside within his coping distance.  We meet other dogs when we are out walking and mix on lead/off lead walking.  We have "moments", we have met the most ignorant, rude and aggressive people (both with or without dogs themselves).  We have also met the most understanding and wonderful people.  Like the lovely man up the road who puts his hat on if he sees us because I told him Jacko hates bald men, so he hides it to stop a reaction.  Like my friends who come round and ignore Jacko when they come in until he calms and then make a massive fuss of him, like the children on the estate I walk through to get to the field, that stop riding their bikes as Jacko comes through because they know it bothers him.  All these little things help keep him calmer and reduce triggers of a reaction.

There is still a long road ahead.  Things we need to learn how to manage and reduce reactions to.  Places where we are unlikely to be able to go for a few years yet, games we have not played (he still won't play outside).  Surprise reactions to things that we thought he could cope with, or things he has never met before.  Plans to do dog training classes and agility which are put on hold again as he cannot cope just yet, but we work around these.  Luckily he is not reactive to other dogs, however he does want to say hello to every dog he sees (regardless of distance) which is an issue, especially with patchy recall off lead and a major reaction if on lead but again, each situation brings me new knowledge and things have improved and continue to do so.

However I have never thought of sending him back.  I never thought that this is all too much to cope with (I've got close), I've never thought of what life would be without him sat on my feet, snoring and farting/burping as he does, as it would not be the same.  I think about giving up my full time job (without a major lottery win this is not going to happen), my children leaving home, one down, two to go... and I think about the things I have learned and calories I have burned.  I think about all the new people I have met through having Jacko.  I can see the trust in his face that I am not going to hurt him and yes, I will protect him from that very scary van/bike/bus going past or the lady with the big furry hat. She scares me too!

Adopting a dog is a lottery.  There is a reason why (good or bad) that the animal has ended up where they are.  We cannot change that, we can just work to make them safe, secure and social.  Even if it takes forever, and in dog years forever is a very short time. But for them its their life, and who doesn't want a happy life?